Following my three-year-old tradition, I spent the last few days reading and summarizing HTTP Archive's yearly Web Almanac on Twitter. As usual, the folks behind it put together a comprehensive report on the state of the web, backed by real data analyzed by trusted web experts.

If you're curious, here are the previous summaries:

I won't summarize the entire mega-thread here, so head over to Twitter to read it entirely if you're curious.

.@HTTPArchive's annual state of the web report — the Web Almanac — is out!

As every year, I'll give it a read and share interesting facts below...

The largest found stylesheet was a whooping 62MB heavy, and the site with the most included stylesheets loaded 1387 CSS files. Both facts are quite an accomplishment — respect! 🙈

Surprisingly, 71% of sites define their font sizes in px. 😲

@HTTPArchive 71% of font-size declarations are in px? 😲 I haven't used pixel font sizes in years. 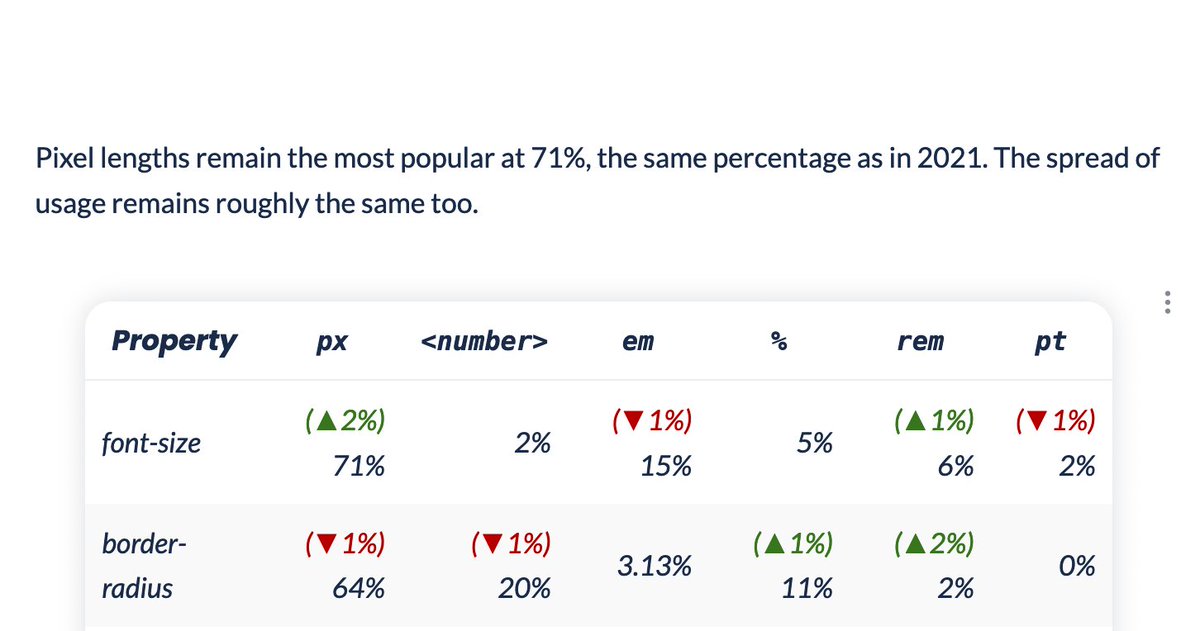 Almost nobody uses accent-color yet... 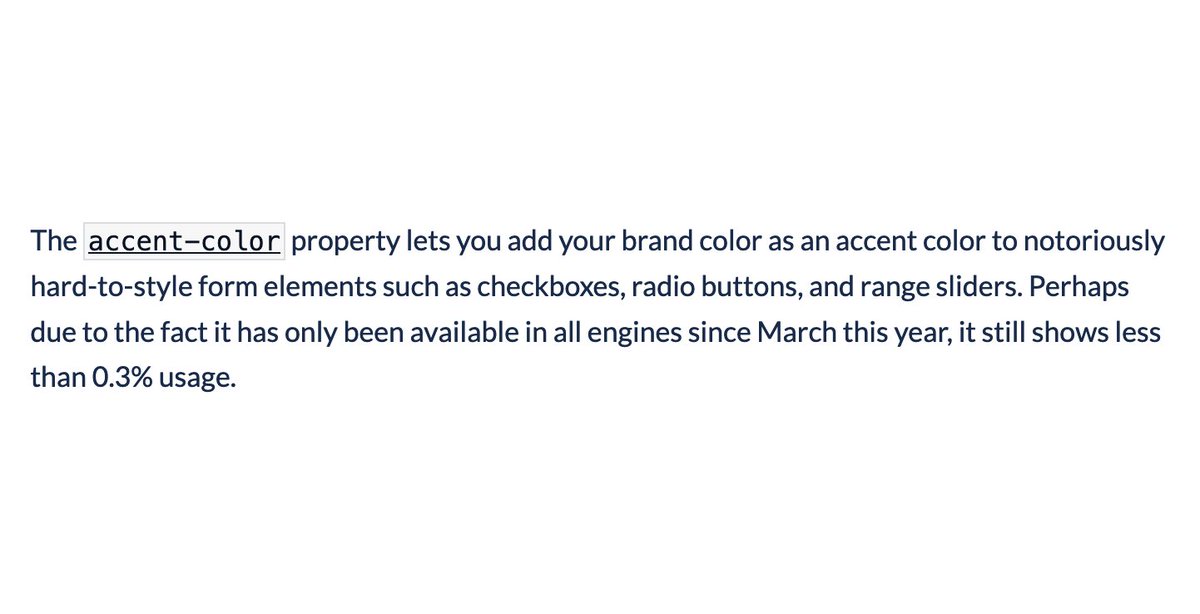 But on the other hand, 34% of sites include reduced motion handling! That's way more than I expected!

34% of the pages include reduced motion handling! 💪

No surprise if you've read the previous reports, but jQuery was and still is the most popular frontend lib, with roughly 80% of sites using it.

@rachelandrew @malchata And here's the graph everybody waited for.
Congratulations jQuery you'll be always in our hearts! 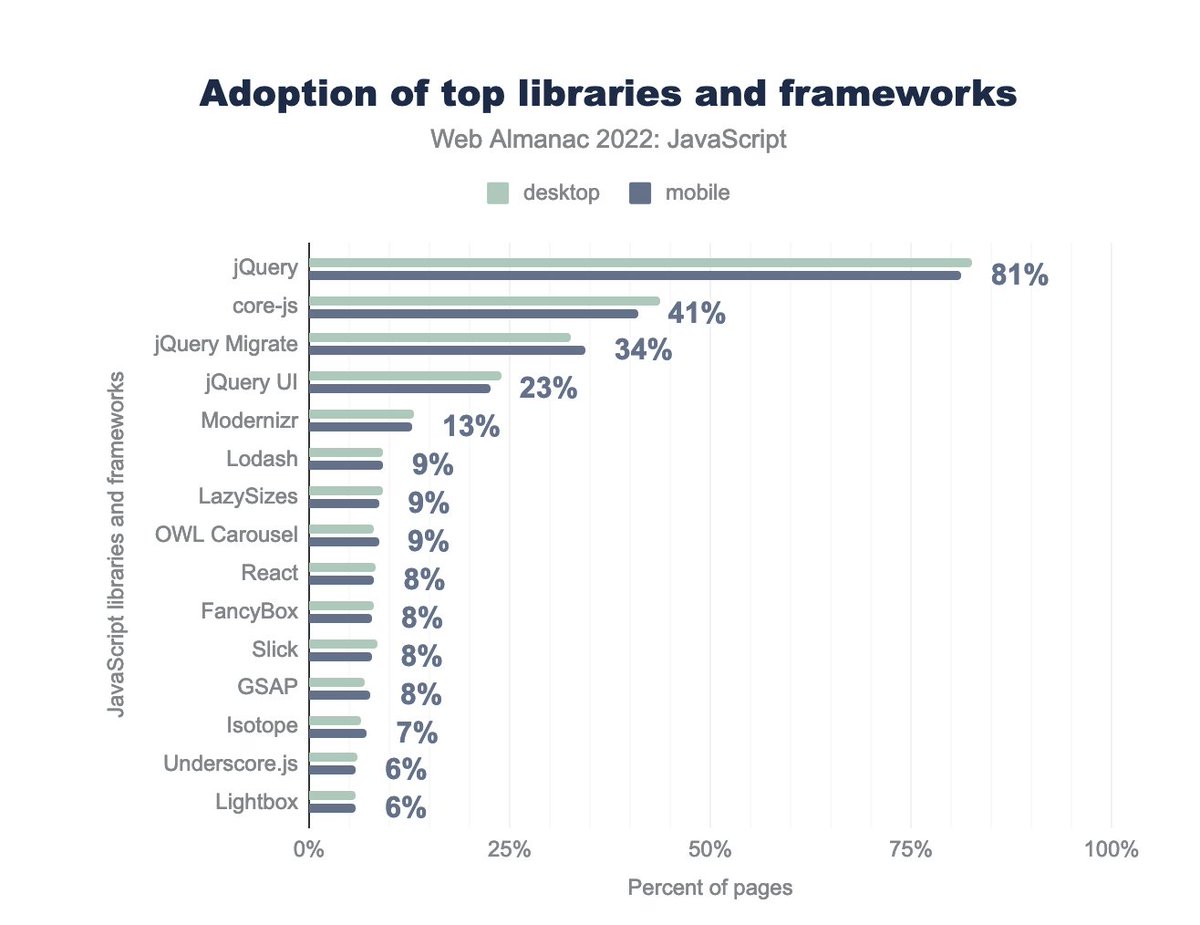 I would have hoped for webp being more adopted. AVIF is so small it's not even labeled in the graph. 🙈 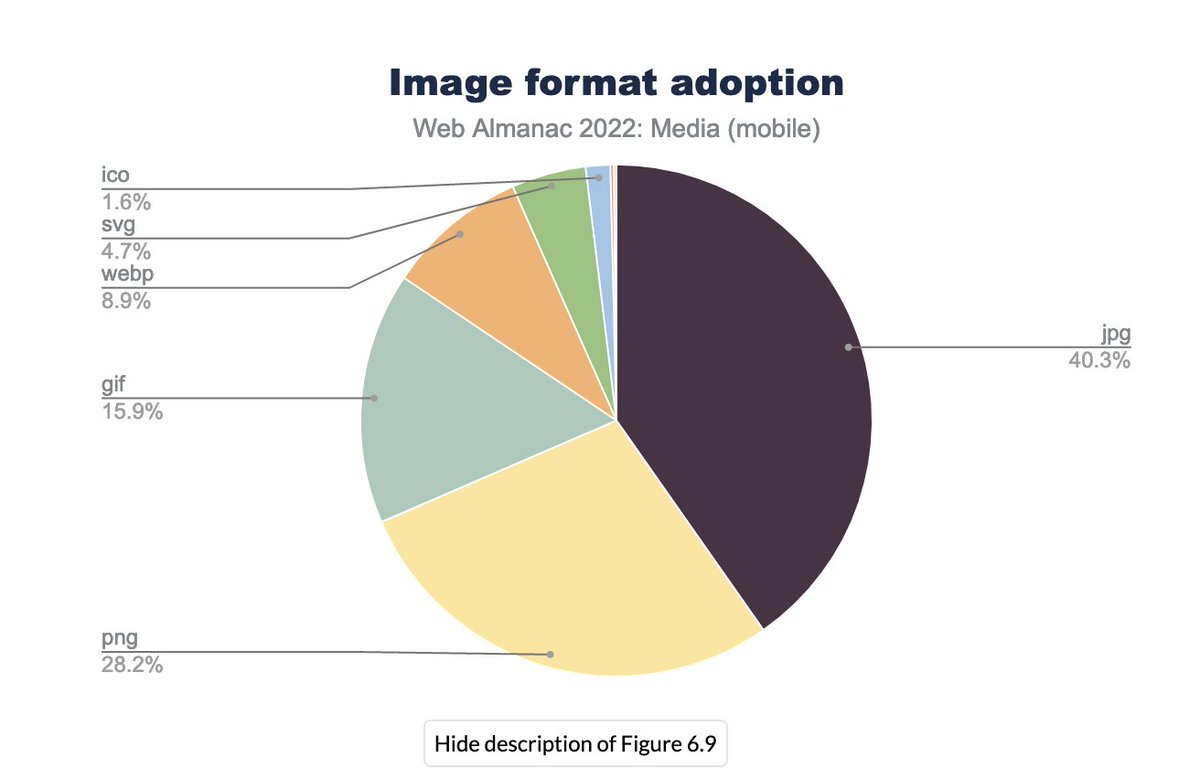 Google's web presence is just absurd. With the following list of embedded third-party resources, there are probably very few sites out there that aren't loading Google scripts, sheets, fonts...

I think it was the same last year, but this Google dominance is massive. 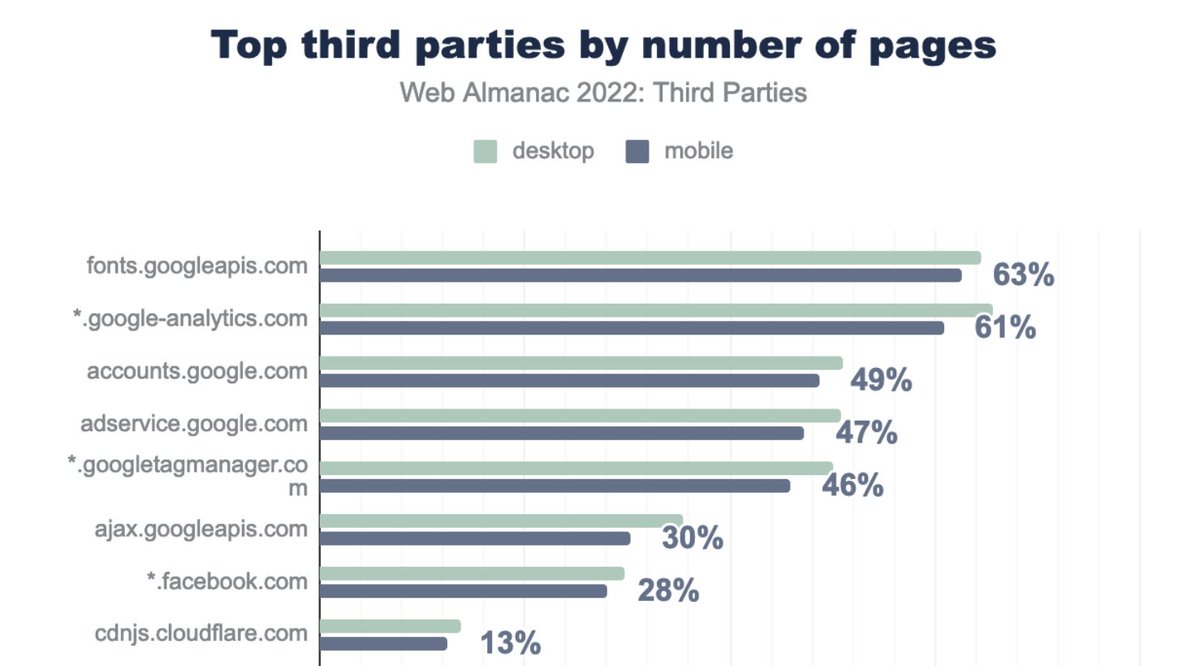 Over a quarter of the web traffic is bad bot-driven. 😢 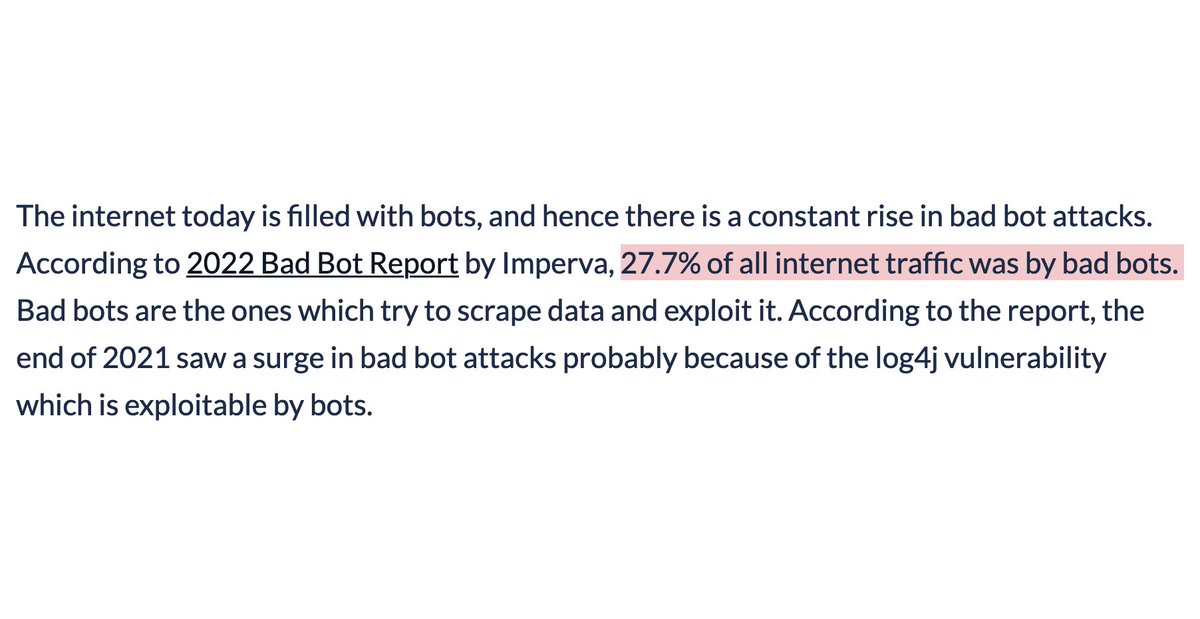 Learnings from the Web Almanac

I've forgotten that if a script includes an async and defer attribute, async overrides defer.

The ascent-override and descent-override CSS properties allow you to "fiddle" with a font's rendering and display. 😲 I didn't play around with it yet, so I can't tell you more about it this time. 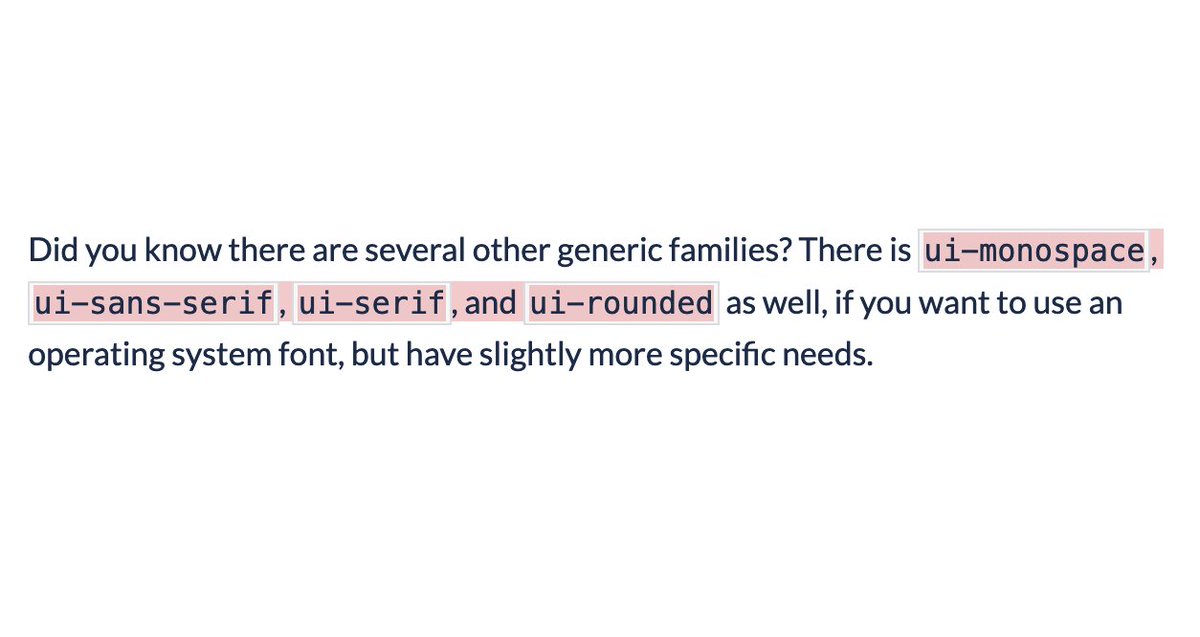 I was aware of the special endpoints in the /.well-known/* URL path. E.g. you can provide instructions for password managers on changing a password under /.well-known/change-password. But I thought there were only a handful of these URLs.

Thanks to Arnd Issler, I learned that there are plenty of "well known" endpoints. I doubt that they're that well known, though.

From most of them one might not have heard, but mta-sts.txt and the autoconfig/mail are quite useful and can be found often on mailservers.

And this is this year's quick summary. If you have the time, I highly recommend reading the Web Almanac yourself or checking all my other highlights on Twitter. It'll take a while to make it through everything, but I'm sure you'll learn something new!

A big thanks goes to all the people involved in this years Web Alamanac. It was, as always, stellar work! 🙇‍♂️

Was this post helpful?
Yes? Cool! You might want to check out Web Weekly for more web development articles. The last edition went out 7 days ago.